Arthur's Court is north of the main town hall. Among the court's most important artifacts is the largets tiled heating stove in Europe, with a height of 10, 64 metres and made up of 520 intricately designed tiles.

The tradition of Arthur's Courts dates back to the middle-ages, from an ethos held by European knights. The courts derived their name from the legendary leader of the Celts, King Arthur. In the middle ages he was the role-model for knighthood and the round table, where he sat with his brave knights, was a symbol of harmony and equality.

Arthur's Court in Gdansk is north of the main town hall. It is one of ten structures on the Baltic built at the beginning of the 16th century which has survived in its original form to the end of the 20th century.

The myth of King Arthur and the knights of the round table was told to wealthy inhabitants of Gdansk, who imitated the feudal customs of knighthood. The court became a focal point for social life and is written about in detail. Here were held meetings, wedding receptions, as well as theatrical productions. From 1742, it also served as a stock exchange. The court building was constructed between 1476 and 1481. Its rebuilding following the damages sustained during the second world war was completed in 1997. The long gothic hall of the court is filled with works of art funded by the brotherhood of Arthur's Court from the 15th to the 19th century.

Among the court's most important artifacts is the largets tiled heating stove in Europe, with a height of 10,64 metres and made up of 520 intricately designed tiles.

Amongst the museum complex of Arthur's Court is the great town house with a historic interior, whose decor originates from the turn of the 18th century. Presently, Arthur's Court holds a collection illustrating the works and functions of the whole complex within the economic and public framework of the town.

Arthur's Court (as its days of glory) is visited by important visitors to Gdansk, for example monarchs and heads of state.

Opening Hours of the Museum:

Educational Visits to the History Museum of Gdańsk

Lessons are given during the school year. Should you wish to organise a lesson, please inform us at least 2 weeks before the planned visit, along with the topic of the lesson, the address and phone number of the school, the class and also the name of the teacher who will accompany the group.

The cost of conducting a lesson is:

50 zl plus 4 zl per person (Town Hall, Arthur's Court and the Amber Museum)

During the lessons only one class of 30 people maximum may join in. We kindly request that you arrive at the lessons punctually; an absence of 15 minutes may not be admitted to the lesson.

In the case of cancellations, please give prior warning by telephone. Further information on the topics of lessons is available from the Department of Education and Customer Service:

During the course of the year, temporary lessons will be added to the programme; information may be obtained from the following websites: www.trojmiasto.pl or www.mhmg.gda.pl

MEETING WITH THE LADY IN THE WINDOW - special offer for youngsters, a fascinating story of how people lived in the Gdańsk of yesteryear - their customs, learning their traditional dances, songs, drawings ( + 48 58 76 79 150).

3. GDANSK OCZYMA DYLA SOWIZDZAŁA - Created with the youngest in mind, a meeting with a famous prankster, who through the medium of fun and games will show you how the former Arthur's Court was a meeting place for merchants and also the grandeur of Gdansk as a port and the life of the sailors .

1.Dialect of Gdansk - students will learn something about the kind of German used in Gdansk in the 19th and 20th centuries, its development, metamorphosis, and its pronunciation (+ 48 58 76 79 186)

3. The Architecture of Gdansk - a demonstration of the main function and decorartion of Gdansk buildings of the 16th and 17th centuries on the basis of the most brilliant works of architecture the town can offer (+ 48 58 76 79 186)

Everyday at 13.03 (in the summer season from 1 June to 15 September, additionally at 15.03 and 17.03) from the top window of the house adjoining Arthur's Court - New Lawy House - a character symbolising the eternally young Gdansk lady looks out at the passers-by. The character is the brainchild of Ewa Topolan, artist and sculpture from the Gdansk Academy of Fine Arts. The mechanism was engineered by Tadeusz Nowosielski.

The idea was inspired by the story by Jadwiga Łuszczewska-Deotyma (1834-1908) called 'Panienka', published for the first time in 1893 in Warsaw. The second edition published in 1898 went under the name of 'Panienka z Okienka'. In 1959 the story was adapted for the theatre and then a cinema version was made in 1964. This 'old-fashioned romance' came about after Deotyma's journey with her parents along the Vistula to Gdansk in 1858. As a result, she became fascinated with our town and its history. In Deotyma's story a colourful and wonderfully suggestive Gdansk plays backdrop to a young woman from Gdansk called Hedwiga, looking through the window of a wonderful town house, called the Amber House.

From the moment of its publication, the story which had been handed down, told and retold, became essential reading for future generations of Poles, who in this way could express their heart-felt relationship with the most famous of Polish ports. Many of them while visiting Gdansk would faithfully search for the Amber House and the window. As Professor Samp writes: 'Many times while looking at Gdansk townhouses have I tried to find the one true small round window.' However, the book itself encourages future attempts to find the house and the window in its last sentences, which close the story, sounding almost like a testament from the author, contain within them a ready script and suggestions for further popularisation.

The inauguration of the 'Panienki z Okienka' exhibition took place on June 1st 2001, accompanied by the melody of Martini Il Tedesco's 'Plaisir D'amour'. 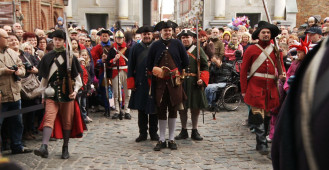 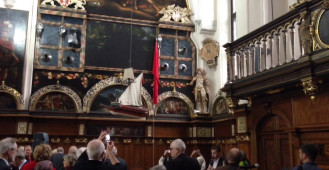 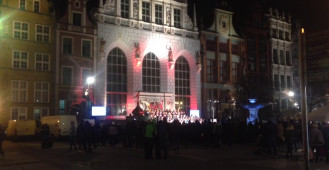 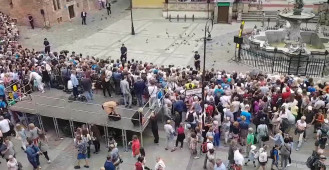 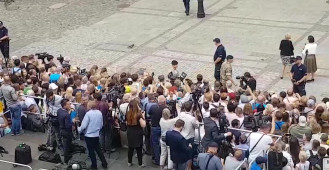