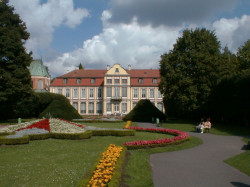 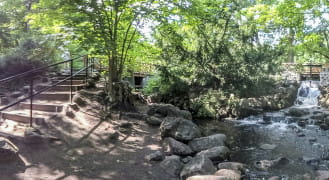 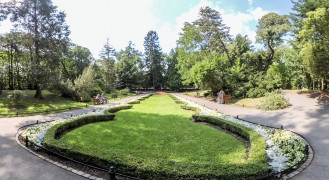 The charm of the park is that here we can find botanical specimens from all over the world. The names of these exotic trees are all clearly labelled. Today is the favourite place for inhabitants of Gdansk to have a nice relaxing stroll.

The first park opened here in the 15th century but the one you can see today has been in existence since the first half of the 18th century thanks to the initiative of Jacek Rybiński. The garden was designed according to the French baroque style. The project was drawn up by the gardener Hentschla. However, the work was executed by Kazimierz Dębiński, who also designed the gardens at Izabela Czartoryska-Lubomirska's residence in Wilanów.

On there East-West axis lies a 112 metre path lined with sculptured and trimmed lime trees 15 metres high. Running either side of a canal, the path consists of two tree-lined alleys. The canal gives the illusion that the sea starts right here, even though it is in fact 2 kilometres away. The monks used to refer to this alley as the 'Road to Eternity'.

The main alley is bordered by an artificial lowland, formerly known as 'paradise'. Here in springtime bloom magnolias, azalias and rhodedendrons. On the western side of the lowland lies a bust of the poet Adam Mickiewicz, put there in 1955 to commemorate the anniversary of his death.

Right next to the lowland lie two 18th century dome-shaped whispering chambers. When two people stand there, each in one of the chambers back to each other and facing the wall, they can communicate with each other in whispers. East of the paradise, on the main pathway through the park, lies an 18th century greenhouse housing exotic plants, rebuilt in the 1950s. Next to the greenhouse lies a rockery made in 1910 and further on are the Botanical Gardens dating from 1956.

North west of the French part of the park and palace, the park was widened and extended at the end of the 18th centure in the style of an English garden by reworking some of the already existing trees. This is the work of a gardener from Berlin, Salrzmann, brought in by Karol Hohenzollern-Hochningen, the pennultimate abbot of the monastery. Saltzmann was the son of a famous garden keeper who designed the gardens in Sans Sousi. The only items remaining here from former times are the two knolls and the large L-shaped pond through which runs Oliwa brook, flowing out of the pond via a small waterfall showing foam over the boulders below. Until the end of the 16th century in this place there was an old factory making wire.

Not far from here there is a small pavillion built in 1981 to replace an older one. Here you can find artists painting the trees, including two enormous beeches and limes which predate the park.

The charm of the park is that here we can find botanical specimens from all over the world. The names of these exotic trees are all clearly labelled. The trees include some wonderful European larches and one Japanese larch, white chestnut trees and edible chestnut trees, red oak and dark oak, birches, magnolias and many other exotic trees and bushes.

In 1831 the Prussian king Frederyk II confiscated the property of the monks in the Pomeranian region. Therefore, the park and the palace passed into the hands of the Hohenzollern family.

Later on, the park was opened and from 1860 was accessible to the general public. Today is the favourite place for inhabitants of Gdansk to have a nice relaxing stroll. Children in particular love the park and feed the ducks and fish and in summer enjoy crossing the stones which span Oliwa brook.
zobacz wszystkie opinie i komentarze na forum (9)
Oceń
+
Portal trojmiasto.pl nie ponosi odpowiedzialności za treść opinii. Opinie wulgarne, obraźliwe, naruszające prawo będą usuwane.