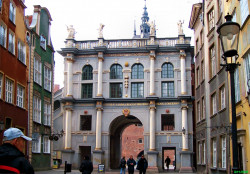 The Golden Gate - built in 1612-1614 by the architect Antoni Van Opbergen and the mason J. Strakowski on orders from the Town Council. On the gate stand allegorical figures representing Peace, Freedon. Wealth, Fame, Harmony and Justice.
This magnificient edifice was erected during 1612-1614. The Golden Gate was built under the guidance of Jan Strakowski, according to an original project by Abraham Van den Blocke.

The two-level facade of the gate, designed with three entrances and four enormouns windows, was further elaborated with wonderful columns as well as rich artistic decor. A highly interesting element is the stone balustrade, and a further attractive feature are the sculptures from the hand of the Gdansk artist Piotr Ringering. From the outside we can see the figures which symbolise the values most highly regarded by the city: Peace, Freedom, Wealth, Fame. From Długa Street can be seen characters symbolising: Prudence, Justice and Harmony.

The Golden Gate is a relic of the greatest era in Gdansk art. This was also a perfect reason to open the city to foreign methods of building - the gate is also a terrific example of how Dutch and Italian designs could be exploited.

During 1803-1872, The Golden Gate acted as headquarters for the School of Fine Arts, under the deanship of, amongst others, Johan Schultz - a famous Gdansk engraver. This valuable monument underwent considerable damage during the last war. It was rebuilt in the 1950s and, along with the nearby St. George's Court, was dedicated to the needs of the Association of Polish Architects.