The Green Gate is part of the Museum. However, it contains no artifacts of its own. The two main rooms serve as exhibition halls containing not only temporary exhibitions of the National Museum of Gdańsk, but also of other museums and institutions as

The Green Gate is part of the Museum. However, it contains no artifacts of its own. The two main rooms serve as exhibition halls containing not only temporary exhibitions of the National Museum of Gdańsk, but also of other museums and institutions as well. The stylish interior of the Green Gate also holds meetings, conferences and shows.

Resembling a palace, the Green Gate was put up by the Dutchman Regnier of Amsterdam and Hans Kramer from Dresna from 1564-1568. The name of the gate is connected with the nearby bridge built from green coloured stone.

Earlier in a nearby place stood the Koga's Gate, as we know from an entry in a 1553 chronicle. The new gate took on the form of the Dutch renaissance. The building materials were brought in from Amsterdam - small Dutch bricks as stone - which was used for the entry, the passway and the windows.

At first the gate had three entrances over which hung the crests of Poland, Prussia and Gdańsk. A fourth entrance was put in as late as 1883, over which hangs the Prussian emblem.

Initially the Green Gate served the needs of the town. However, in 1569 the famous Karnkowski commission decreed that towns must also serve duty to the republic, for example by providing a town palace for the monarchs of Poland. The town authorities took the decision to hand over the showcase gate to the needs of the royal court. On 9th February 1570 took place the official ceremony, handing over the residence to the representants of the Polish authorities. The death of Zygmunt August (1572) and the subsequent internal strife within the republic allowed the town to get out of having to provide royal accomodation. Only once (from 11-12 February 1646) were the three town houses adjacent to the gate occupied by a royal resident - Maria Ludwika Gonzaga, the wife of Władysław IV.

During the second world war the building was burnt and later was only partially restored to its former glory. Over the following years the building was not properly maintained, which meant that at one stage the Green Gate was on the point of collapse. The appearence of this uniquely priceless monument was changed for the better following a recent comprehensive renovation. 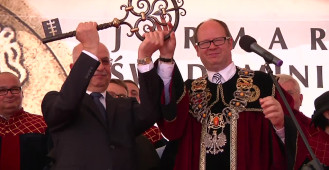 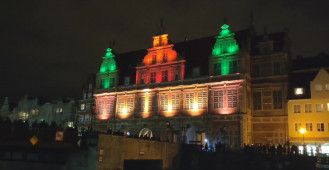 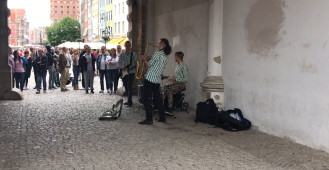 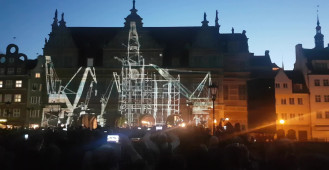 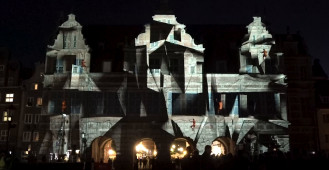